and Structural Damage Repair including Casting.

This page provides before and after images of selected restorations this website's owner has done.[1] Each restoration exhibits for the most part, a different set of the kind of issues enumerated above and whose resolution is described in what follows. Additional images of these restorations are available upon request. The first six of these restorations sustained excessive or problematic paint loss. Therefore, the restoration of these six groups involved total repaints.[2]
Rip Van Winkle at Home exhibits a typical issue one encounters with old painted statuary, excessive paint loss. To resolve this issue the surface must be reconditioned--all dead paint removed and the surface smoothed so there is no indication any flaking has ever occurred.

The Home Guard came to us covered with egregious brown, green, blue house paint on the clothing and silver radiator paint on the body parts with virtually no original paint remaining beneath and a wobbly base but fortunately, few other issues. Not a great picture to the left, but one can get the idea. It was taken after some of the house paint had already been removed. We exhibit this restoration to make the point that one must take precautions  when removing metallic paints that one sometime finds applied to Rogers Groups. One must use a respirator and not work in a confined space that is not  well ventilated. Working in an open space (outside) is advised. The middle picture shows the group after the "bad" paint has been removed and the surface has been prepared for receiving paint.

Along with excessive paint loss and some chipping, You Are A Spirit I Know: When Did You Die? required us to do a casting of Cordelia's face which had been almost completely rubbed smooth (abraded).

The Traveling Magician came to us in horrendous shape as can be readily seen. We made castings for the young girl's skirt and right arm (already attached at the time this "before" image was taken), her legs and feet, the rabbit, the front half of the tambourine along with the girls left arm, and the revolver on the table. Surface preparation, sculpting, attaching the magicians broken-off right arm, and restoration of the script on the scroll which was unreadable were all necessary as well.

The Photograph (The Sitter) is Rogers' only two piece group as far as we know. Here, the child been entirely broken along with its left arm that intertwines with its mother's right. This is more of a simple casting and attachment issue.

Unfortunately, K&G does not have a useful picture of The Wrestlers in its unrestored state which required sculpting Touchstone's shattered right foot and the broken toe of Charles' right sandal and the repair of Orlando's chipped left boot cuff.  Also, Charles' right shoulder, Orlando's right thigh, and portions of the pedestal in front of Touchstone were repainted ("touched up") because of paint loss as well as other spots much in need of (color matched) "touchups". Happily, it was however, unnecessary to repaint the entire piece. Thus, despite its restoration, we preserved well more than 95% of its original paint (OP). 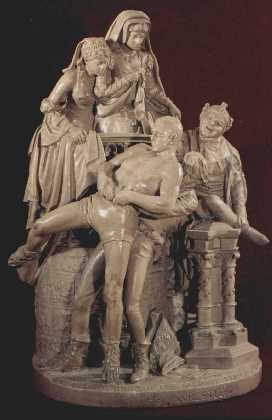 [1] Plaster statuary, being fragile can have some serious wear issues. That some plaster statuary, such as John Rogers statuary which is well over one hundred years old, is still even extant is in its own right quite remarkable. Consequently, as one would expect, more examples than not of Rogers Statuary will exhibit a variety of issues, such as; chipping, breaks, paint loss, spalling, abrading, and "alligatoring" to name. Any one of these issues can be minor or severe. K&G Enterprises has extensive experience dealing with such issues and stands ready to assist those with Rogers statuary in need of repair where it is cost effective. Where it is not cost effective, primarily because the repairs are minor and not particularly daunting, K&G Enterprises will provide repair and restoration instructions pro bono.

[2] We are very good at matching hues. However, doing so works most ideally when the areas to be "touched up" are relatively few and small for reasons that our limited space does not permit us to enumerate. We can provide images of such restorations upon request.